Click here for the MTV link, or continue to read from here.

The second my eyes blink open in the morning, I reach for my phone. Did I get faves while I was sleeping? Who tweeted at me? Which celeb is breaking the internet today? It continues all day with dings on my laptop and chimes on my phone.

When I’m in line to buy lunch, as I work, during my breaks — I’m constantly plugged in, refreshing my browser, wondering which screen I should look at next. I started to notice that even when I wasn’t “plugged in,” my mind was busier than Kim Kardashian’s Twitter feed. I was constantly focusing on so much that I could never focus at all.

A friend of mine told me he had a similar problem and had treated it by going to a sensory deprivation tank. I did some research and found out that despite what its name suggests, a sensory deprivation tank is not a torture device. Rather, it’s a place where you can float in darkness and silence in water that’s exactly your body temperature. It gives you the opportunity to do absolutely nothing far, far away from sensory distractions like your tech devices.

Considering I’d recently started thinking in emojis, I figured I’d give it a shot. I headed to Groupon, the resource for all things ridiculous and reasonably priced, and shelled out $40 for an hour in a sensory deprivation pod. Then I headed out to get my nothing on. Here’s what happened:

The second I stepped into the lobby, I felt like I’d been transported into a science fiction movie. The walls and furniture were all white. Trance music played softly in the background. There was a water fountain with a cool LED light. I immediately felt both relaxed and prepared to be beamed into another dimension.

Before I could enter my pod, I was told to watch a video about my upcoming “float.” In it, a very enhusiastic and oddly satisfied looking man explained how to properly get into the tank and that we should be prepared to “open entirely new corners of our minds.” I hoped one of those new corners of my mind would show me something cool, like the answer to why you never see baby squirrels.

It was dark, about the size of a small bedroom, and had a private shower. In the middle of it was a giant, white, egg-shaped pod. I showered and stepped into the pod.

I immediately noticed how thick the water felt, on account of how much salt was in it. I adjusted the pod’s settings, from lights that made the water glow with different colors to mediative music playing through underwater speakers. Since I was going for the true sensory deprivation experience, I chose no lights and no sound.

I was surprised that I didn’t feel claustrophobic, given the tiny space I was floating in. The total darkness helped me let go of any sense of place, and the water was so salty that my body floated with no effort. I shut my eyes and (doh!) started picturing my email inbox.

I was finally able to “stop thinking” when my brain got used to the idea that there was nothing to focus on except the sound of my own breath. I felt myself becoming extremely relaxed and realized that unless I thought about it, I couldn’t tell if my eyes were open or not. I rubbed my eyes with my hand, which was covered in salt water. Ouch. Pain was apparently not one of the senses this thing could eliminate.

A chime rang and a gentle voice told me that my float session had come to an end. I was disorientated because I’d lost all sense of time. (Time! Another thing I need my phone for.) I also couldn’t tell whether I had fallen asleep or meditated so deeply that I’d lost track of my consciousness. Judging from the fact that I can sleep in the middle of a crowded airport terminal, I assumed it was the former.

I did feel very calm when I left the float center, but that was almost immediately disrupted when it was time for me to head home in L.A. traffic. I made it back without cussing at anyone, though, and started to work on a project that I’d been hoping to have more focus for.

When I felt tempted to check Facebook or Twitter, I reminded myself of my meditative time in the pod, and, more importantly, that I had paid $40 to stay off of social networking sites for a minute. In the end, I was able to finish my project. I have to say, I think the fancy water nap I had just taken may have played some part in that.

Now, is there something futuristic and cool I can do to treat my severe case of “texting thumb”? Dreamwater Float Factory – This is where the Dreampod is made. 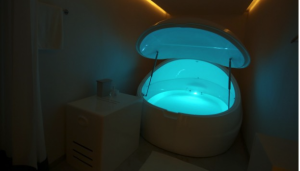